At the end of 19th century Shuri-te and Tomari-te mixed together under the name Shorin ryu , and developed into several slightly different styles. Naha-te was later renamed Goju ryu (hard and soft style).

Grand master Kanryo Higaonna was born on march 10,1853. In Naha, the capital city of Okinawa. His father worked as merchant sailor between the small islands of Okinawa. From a young age Kanryo Higaonna helped his father with his work and through physical labour he developed a strong body.

Kanryo Higaonna was in his teens when his father suddenly died. Kanryo decided that he wanted to study martial arts and he went to Fuzhow, China (in 1869). In China he studied under Great Master Ryu Ryu Ko. He soon became “uechi deshi” (private disciple) and he remained in China under the severe instruction of his teacher for approximately 13 years. In addition to studying empty handed martial arts he became proficient in weapons techniques and Chinese herbal medicine.

Chojun Miyagi (the founder of Goju ryu) and succesor to Kanryo Higaonna said “My sensei possessed incredible strength, the severity of the training he underwent in China is beyond comprehension. Kanryos sensei had speed and power that were truly superhuman, his hands and feet moved faster then lightening”.

In the year 1881 ,after 13years of study with his teacher he returned to Okinawa and Naha. His martial art became known as Naha-te, (also refered to as “Tode’’ meaning martial arts from China). Kanryo Higaonna taught these martial arts to the people of Okinawa and at the same time continued his own research and practice. In order to teach the youth of Okinawa he developed a teaching method which was specifically designed to develop the mind and body, to improve both physically and spiritually.

The secretive art of Naha-te was opened to all societies in general, October, 1905, when Kanryo Higaonna began teaching in High school.

Kanryo Higaonna was extremely hard while teaching, but in his everyday life he was a quiet and humble man and was known for a virtuous character. He led a simple life which was completely devoted to the study and practice of the martial arts.

There are many stories about his life and training. The power of his legs was so legendary, that he was often referred to as “Ashi no Higaonna’’ (“legs Higaonna’’) in Okinawa. His virtuous character was widely known and respected, and because of his popularity the people of Naha-te bestowed him with the name, “Obushi Higaonna Tanrei“ which reflected the affection and respect they had for this great man and supreme martial artist .

Kanryo Higaonna’s unparalleled skill in martial art aside His great and distinguished work was in bringing the Chinese martial art forms from China to Okinawa , and spreading these arts among people of Okinawa.

His name is synonymous with Okinawa martial arts and Naha-te, and Kanryo Higaonna’s whole life was devoted to karate .He passed away in December 1915 at the age of 63.

Grand Master Chojun Miyagi was born on april 25 , 1888 in an aristocratic family . His family was in import/export business, and owed ships which made regular trips to mainland China , placing them among wealthiest families in the area.

He began training in karate under Kanryo Higaonna at the age 14 in 1902. Like his teacher before him, because of his great talent and fierce determination he progressed very fast. The training was severe beyond belief at times but He practised ever harder with enthusiasm unmatched by any of the other students. Chojun Miyagi became “uchi deshi’’ of Kanryo Higaonna. He studied with his teacher for 14 years before his teachers death in 1915.

Chojun Miyagi worked hard to spread karate throughout Okinawa and mainland Japan, and to earn Naha-te status equal to that of the highly respected Japanese martial art of judo and kendo. To achieve this he traveled frequently to mainland Japan were He was invited to teach karate at Kyoto University. In 1933, karate was registered at Butokai, the center for all martial arts in Japan. This was a milestone for karate as it meant that it was recognized on a level with the highly respected martial arts of Japan.

Chojun Miyagi was responsible for structuring Naha-te ( which he later named Goju ryu) into a systemized discipline which could be taught to society in general. This teaching system, that formulated and enabled karate to be taught in schools for the benefit of the young , and to reach vast numbers of people throughout the world. His private teaching remained strictly in adherence to the principles of his teacher Kanryo Higaonna and his teacher, Ryu Ryu Ko. Chojun Miyagi died on October 8th, 1953 ,of either a heart attack or cerebral haemorrhage at the age of 65 .

The naming of Goju ryu came about more by accident then design. In 1930 one of Chojun Miyagi’s top students Jin’an Shinzato was attending a martial arts convention in Tokyo. He was asked by numerous martial arts masters as to what school of martial arts he practiced. As Naha-te had no formal name he could not answer this question. Feeling his arts would be looked down upon and given amateur status. He quickly picked Hankry-ryu , which means the way of half hard.

On His return to Okinawa He reported this incident to Chojun Miyagi . He liked Shinzato’s idea and took it one step further. After much consideration Chojun Miyagi decided on the name Goju ryu ( hard and soft school) as the name for his style.

He took His name from a line in the Bubishi ( classical Chinese text on martial arts and other subjects). This line which appears in a poem describing the eight principles of martial arts, reads Ho Goju Donto ( the way of inhaling and exhaling is hardness and softness). The whole poem reads as follow:

1. The mind is one with heaven and earth .

2. The circulatory rhythm of the body is similar to cycle of the sun and moon.

3. The way of inhaling and exhaling is hardness and softness.

4. Act in according with time and change.

5. Techniques will occur in the absence of conscious thought.

6. The feet must advance and retreat ,separate and meet.

7. The eyes do not miss even slightest change.

8. The ears listen well in all directions.

The succession of Goju ryu .

Jin’an Shinzato was very talented, and that’s why Chojun Miyagi had chosen him as successor to Goju ryu school in Okinawa. Shinzato was tragically killed during Second World War. Because of Chojun Miyagi’s sudden death, there is no publicly named successor. Some of His senior students of many years, opened their own dojo and in time build organizations. Some of Chojun Miyagi’s notable students were: Seiko Higa( his oldest student), Miyazato Ei’ichi (founder of the Jundokan dojo),Meitoku Yagi(Founder of the Meibukan dojo, who eventually accepted Miyagi’s gi and obi from Miyagy’s family), Seikichi Toguchi ( founder of the Shorei-kan goju ryu), and Gogen Yamaguchi, who was the founder of the Iternational Karate Goju kai Association and who after training with Miyagi became the representative of Goju ryu in Japan.

Sensei Miyagi and some of His senior students. 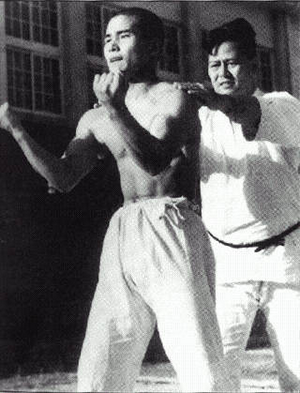 He also trained other students who went to create their own styles such as Shimabaku Tatsuo (Isshin ryu).

Chojun Miyagi passed away on October 8th , 1953. Leaving a great legacy behind. He predicted that that during the 20th century karate world spread throughout the world .Today we can see that this prediction has been realized, karate is not only practiced in Japan, but can be found throughout the world. Karate can no longer be referred to as a solely Okinawan or Japanese martial art it now knew no boundaries , it was an art for all nations around the world.

The Ontario Karate Federation is focused on improving the promotion and accessibility of the sport of karate to its members and to the general public.

Arawaza is one of the strongest brand names in the martial arts world offering a fine choice of quality products.